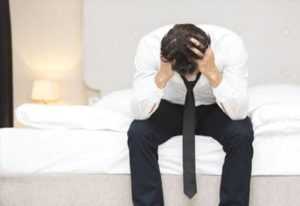 Riddles are a fun way to spend with friends or family. Many of the riddles are fun and very easy to solve. These tricky riddles going to cause you challenge. It is not the most obvious answers that can solve these riddle. One must in fact think outside the box. However, do not get frustrated if you have difficulty, click on the riddle and an answer will emerge. Good luck.

A man was found dead in his study. He was slumped over his desk and a gun was in his hand. There was a cassette recorder on his desk. When the police entered the room and pressed the play button on the tape recorder they heard: 'I can't go on. I have nothing to live for.' Then there was the sound of a gunshot. How did the detective immediately know that the man had been murdered and it wasn't a suicide?
The cassette had started at the beginning of the man’s utterance. Someone else had to be there to rewind the tape.
The more there is the less you see.
Darkness.
If you share me, you wont have me.
Who am i?
A secret.
People buy me to eat, but never eat me. What am I?
Plates and cuttlery.
What is Greater than God, worse than evil, the poor have it, the rich require it, and if you eat it, you die?
The answer is ‘Nothing’.
What is full of holes, but can still hold a lot of water?
A sponge.
A local magician is performing his favorite trick to be under water for approx 10 minutes.
I went to the magician and told him that i can be under the water for 20 minutes.
He laughed and den responded 'I will give you 1000 pounds , if you can do this'
I won the bet and get 1000 pounds.
How did i do it?
I filled a glass full of water and held it over my head for 20 minutes.
I am a strong as ten men Yet ten men cannot stand me up. What am I?
Water.
Mark leaves home. He makes a left turn then another left followed by another left. When he gets back home, there are two men waiting for him, both wearing masks. What is Mark's occupation?
He’s a baseball player.
We hurt without moving. We poison without touching. We bear the truth and the lies. We are not to be judged by our size. What are we?
Words.
Two men are in a desert. They both have packs on. One of the guys is dead. The guy who is alive has his pack open, the guy who is dead has his pack closed.
How come?
A parachute that didn’t open.
Some try to hide, some try to cheat, but time will show, we always will meet, try as you might, to guess my name, I promise you'll know, when you I do claim.
Death.

Tricky riddles are the best

Riddles keeps your brain going, yes they are not only fun but gives your mind exercise it needs. You learn to think in a whole different way that enables us to see solutions where you previously saw problems. It’s always more fun to solve riddles with friends or family, here you can in fact make a contest out of it and see who can solve them first. These tricky riddles is not very easy to solve, therefore you need to be a little patient and give yourself a little extra time to think. I hope you enjoyed these riddles.