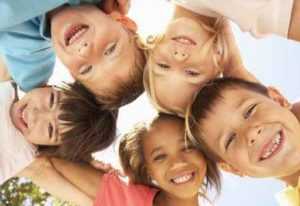 Our children are our future. This planet the tide and the force behind future generations. We must teach them what is right and wrong, we need to give them a life so they can become the best they can. One of these things is happiness and joy. Similarly, we teach them to think properly and different. These riddles gives them three things at once. The funny aspect, the thinking part and the resolution and willpower to solve problems. Prepare your children for the future in a fun way.

What three numbers have the same answer when added together and multiplied together?
The numbers 1, 2 and 3. (1+2+3= 6 / 1*2=2 2*3=6)
What has hands but can not clap?
A clock.
What did the leg bone say to the foot?
Stick with me and you’ll go places.
What is at the end of a rainbow?
The letter W.
What did the rib cage say to the heart?
Got ya covered!
In a one-story blue house, there was a blue person, a blue cat, a blue fish, a blue computer, a blue chair, a blue table, a blue telephone, a blue shower– everything was blue! What color were the stairs?
There weren’t any stairs, it was a one storey house.
What walks all day on its head?
A nail in a horseshoe.
You draw a line. Without touching it, how do you make the line longer?
You draw a shorter line next to it, and it becomes the longer line.
It lives without a body, hears without ears, speaks without a mouth, and is born in air. What is it?
An echo.
You walk into a room with a match, a karosene lamp, a candle, and a fireplace. Which do you light first?
The match.
I fasten it and it walks. I unfasten it and it stops. What is it?
A sandal.
What starts with the letter “t”, is filled with “t” and ends in “t”?
A teapot.
What fastens two people yet touches only one?
A wedding ring.

Here is some great Riddles for kids

A girl is sitting in a house at night that has no lights on at all. There is no lamp, no candle, nothing. Yet she is reading. How?
The woman is blind and is reading braille.
What flies without wings?
Time!
Which weighs more, a pound of feathers or a pound of bricks?
Neither, they both weigh one pound.
What turns everything around, but does not move?
A mirror.
What gets wetter and wetter the more it dries?
A Towel.
What has wheels and flies, but is not an aircraft?
A garbage truck.
A cowboy rides into town on Friday, stays for three days, then leaves on Friday. How did he do it?
His horse’s name was Friday.
What has a tongue, cannot walk, but gets around a lot?
A shoe.
Two mothers and two daughters went out to eat, everyone ate one burger, yet only three burgers were eaten in all. How is this possible?
They were a grandmother, mother and daughter.
What is a cat on Ice?
A cool cat.
How many months have 28 days?
All 12 months.
Do you know why orange juice is so smart?
It concentrates.
What goes around and around the wood but never goes into the wood?
The bark on a tree.
Who can shave 25 times a day and still have a beard?
A barber.
You walk across a bridge and you see a boat full of people yet there isn’t a single person on board. How is that possible?
All the people on the boat are married.
What's colorless and weightless, but if you put it into a barrel, the barrel would become lighter?
A hole.
A man was outside taking a walk, when it started to rain. The man didn’t have an umbrella and he wasn’t wearing a hat. His clothes got soaked, yet not a single hair on his head got wet. How could this happen?
The man was bald.
What runs but cannot walk?
Your nose.
Beth’s mother has three daughters. One is called Clara, the other one is Sarah. What is the name of the third daughter?
Beth.
What kind of nut has no shell?
A doughnut.
What has no beginning, end or middle?
A doughnut.
How far can a fox run into the woods?
The fox can run into the woods only to the half of the wood – than it would run out of the woods.
What grows when it eats, but dies when it drinks?
Fire!
A boy was rushed to the hospital emergency room. The ER doctor saw the boy and said, “I cannot operate on this boy. He is my son.” But the doctor was not the boy’s father. How could that be?
The doctor was his mother.
What goes up and down without moving?
Stairs.
What can run but can’t walk?
A drop of water.
What can you catch but not throw?
A cold.
What’s full of holes but still holds water?
A sponge.
The more you have of it, the less you see. What is it?
Darkness.
If there are 3 apples and you take away 2, how many do you have?
If you take 2 apples, than you have of course 2.
In what year did Christmas Day and New Year's Day fall in the same year?
Every year.
Using only addition, how do you add eight 8’s and get the number 1000?
888 + 88 + 8 + 8 + 8 = 1000.
How many bricks does it take to complete a building made of brick?
One! The last one.
I am an odd number. Take away one letter and I become even. What number am I?
Seven (take away the ‘s’ and it becomes ‘even’).

What is always in front of you but can never be seen
The Future
What goes up and down without moving
Stairs
What has a neck but no head
A bottle
Mr. Blue lives in the Blue house. Mrs. Yellow lives in the Yellow House. Mr. Orange lives in the orange house. Who lives in the White House?
The President
What has to be broken before you can use it
An Egg
What goes up but never comes down?
Your age!
The person who makes it has no need for it. The person who purchases it does not use it. The person who does use it does not know they are. What is it?
A Coffin
If four people can repair four bicycles in four hours, how many bicycles can eight people repair in eight hours?
16 bicycles
What is often on the ground getting stepped on by others, but you don’t have to wash it because it never get dirty, in fact you couldn’t wash it even if you tried?
Your shadow
What type of cheese is made backward?
Edam
Why are ghosts bad at lying?
You can see directly through him
Why did Mickey Mouse go to Outer Space?
To find Pluto

What sits in a corner while traveling all around the world?
A stamp.
How can you throw a ball as hard as you can, to only have it come back to you, even if it doesn’t bounce off anything?
Throw the ball straight up in the air.
What do you call a boomerang that doesn't work?
A stick.
My name is Lucky, I live on a farm. There are four other dogs on the farm with me. Their names are Whity, Max, Buddy and Jack. What do you think the fifth dog’s name is?
Lucky.
What did the ocean say to the sea?
Nothing! It just waved.
How do dog catchers get paid?
By the pound.
What did one math book say to the other math book?
I have a lot of problems.
A boy fell off a 30 meter ladder but did not get hurt. Why not?
He fell off the bottom step.
Why did the elephant cross the road?
It was the chicken’s day off.
What two keys can’t open any door?
A monkey, donkey and turkey.
What can be as big as a horse, but weighs nothing?
The horses shadow.
What 5-letter word becomes shorter when you add two letters to it?
Short.
How do snakes end a fight?
They hiss and make up.
What never asks questions but is often answered?
A doorbell.
Your Mom is in a room with you. Where is one place you can sit where your mom cannot sit?
Your moms lap.
What belongs to you but other people use it more than you?
Your name.
What stays where it is when it goes off?
An alarm clock.
What invention lets you look right through a wall?
A window.
Which letter of the alphabet has the most water?
The letter “C”.
The more you take, the more you leave behind. What are they?
Footprints.
What word is spelled wrong in all the dictionaries?
The word “wrong”.
I’m tall when I’m young and I’m short when I’m old. What am I?
A candle.

You may wonder why I have such a category. These riddles are pretty easy, so you may think that it would be a piece of cake for the child to solve them. You can not be futher away from the truth. Kids way of thinking is way different than the grownups. They can rational thing the way we grownups never would think about, they see connections where we don’t. Riddles for kids is a great and funny way, to keep em thinking in different ways and come up with solutions that will solve exactly the problem that sits in front of them.
Do your kids a favor and introduce them to the fun riddles, they will love them.