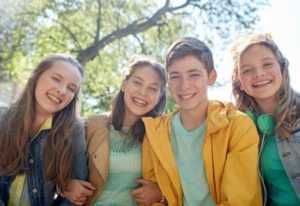 Riddles for Teens are both fun for young people and provide exercise for your brain. The good thing about riddles is that they can be enjoyed by everyone, there are no age restrictions on when it is no longer allowed to try to solve any. Children and adults can try their hand at various riddles and even work together if it comes to friends or family. We therefore have this special category for teens – Riddles for Teens –  they should not be excluded from the fun.

You walk into a room with a match, a karosene lamp, a candle, and a fireplace. Which do you light first?
The match.
When you look for something, why is it always in the last place you look?
Because when you find it, you stop looking!
Two fathers and two sons went duck hunting. Each shot a duck but they shot only three ducks in all. How come?
The hunters were a man, his son and his grandson.
What has to be broken before you can use it?
An egg.
What gets wetter and wetter the more it dries?
A Towel.

Don’t expect all teens to be able to solve the following riddles. They are difficult!

Lives in winter, dies in summer, and grows with its roots upward. What is it?
An icicle.
What is it that you cannot hold even ten minute, even though it is lighter than a feather?
Your breath.
How can a man go 8 days without sleep?
He only sleeps at night.
A girl is sitting in a house at night that has no lights on at all. There is no lamp, no candle, nothing. Yet she is reading. How?
The woman is blind and is reading braille.
If you are running in a race and you pass the person in second place, what place are you in?
Second place.
You can't keep this until you have given it.
A promise.
What gets sharper the more you use it?
Your brain.
Two mothers and two daughters went out to eat, everyone ate one burger, yet only three burgers were eaten in all. How is this possible?
They were a grandmother, mother and daughter.
Two cannibals were chatting as they had their dinner. One complained that he really quite disliked his new mother-in-law. What was the advice given to him by his companion?
So just finish your vegetables!
If I have it, I don’t share it. If I share it, I don’t have it. What is it?
A secret.
The person who makes it has no need for it. The person who purchases it does not use it. The person who does use it does not know he or she is. What is it?
A coffin.
How many months have 28 days?
All 12 months.

If you think these riddles are fun for teens please share it on the coolest social media around. Now let us have som mere riddles:

What's black and white and red all over?
An embarrassed zebra.
I am hard to find, difficult to leave and impossible to forget. What am I?
A friend.
How long is the answer to this question.
How long.
Your mother’s brother’s only brother-in-law is asleep on your couch. Who is asleep on your couch?
Your father.
What question can you never answer yes to?
Are you asleep yet?
You draw a line. Without touching it, how do you make the line longer?
You draw a shorter line next to it, and it becomes the longer line.
What stinks when living and smells good when dead?
Bacon.
Some months have 30 days, some months have 31 days; how many have 28?
They all do.
I have no doors but I have keys, I have no rooms but I have space, you can enter but you can't leave! What am I?
A Keyboard.
Divide 110 into two parts so that one will be 150 percent of the other. What are the 2 numbers?
44 and 66.
The ages of a father and son add up to 66. The father's age is the son's age reversed. How old could they be?
51 and 15
42 and 24
60 and 06
Yes there is 3 different answers.
Which weighs more, a pound of feathers or a pound of bricks?
Neither, they both weigh one pound.
A woman shoots her husband, then holds him under water for five minutes. A little while later, they both go out and enjoy a wonderful dinner together. How can this be?
She shot her husband with a camera and then developed the photo.
What has no beginning, end, or middle?
A doughnut.
A murderer is condemned to death. He has to choose between three rooms: the first is full of raging fires; the second, assassins with loaded guns; and the third, lions who haven't eaten in years. Which room is the safest?
The room with the lions because they would have now died of starvation.
What is put on a table and cut, but is never eaten?
A pack of cards.
A man was outside taking a walk, when it started to rain. The man didn’t have an umbrella and he wasn’t wearing a hat. His clothes got soaked, yet not a single hair on his head got wet. How could this happen?
The man was bald.
Skinny I am fast, fat I am slow, but I'll still delight you from your eyes to your nose. What am I?
A candle.
What starts with a P, ends with an E and has thousands of letters?
A Post Office.
What grows when it eats, but dies when it drinks?
Fire.
If an electric train is traveling south, which way is the smoke going?
There is no smoke – it’s an electric train.
What building has the most stories?
A library.
What goes around and around the wood but never goes into the wood?
The bark on a tree.
Anna drank two thirds cup of wine, and Charlotte drank a fourth cup of wine. Who drank the most?
Charlotte as she drank four cups of wine.
What stays where it is when it goes off?
An alarm clock.
I am taken from a mine, and shut up in a wooden case, from which I am never released and yet I am used by almost everybody. What am I?
Pencil lead.
No matter how terrible things get for the people of the Arctic, they will not eat a penguin.
Why not?
Penguins live in the Antarctic (south), not the Arctic (north).
Sleeping during the day, I hide away.
Watchful through the night, I open at dawn's light.
But only for the briefest time, do I shine.
And then I hide away. And sleep through the day.
The Sunrise.
What’s full of holes but still holds water?
A sponge.

Even more riddles with answers for teens

How many apples grow on a tree?
All apples grow on trees.
A man started to town with a fox, a goose, and a sack of corn. He came to a stream which he had to cross in a tiny boat. He could only take one across at a time. He could not leave the fox alone with the goose or the goose alone with the corn. How did he get them all safely over the stream?
He took the goose over first and came back. Then, he took the fox across and brought the goose back. Next, he took the corn over. He came back alone and took the goose.
You throw away the outside, eat the inside, and throw away the inside.
Corn on the cob.
How far can a fox run into the woods?
The fox can run into the woods only to the half of the wood – than it would run out of the woods.
I am an instrument that you can hear, but you can not touch or see me.
What am I?
Your voice.
Almost everyone needs it, asks for it, gives it, but almost nobody takes it. What is it?
Advice
A man was sitting on his couch and searching for the English Channel.
How did he find it?
Probably a map, it is between England and France.
A boy was rushed to the hospital emergency room. The ER doctor saw the boy and said, “I cannot operate on this boy. He is my son.” But the doctor was not the boy’s father. How could that be?
The doctor was his mom.
Which is correct 'The yolk of the egg is white' or 'The egg yolk is white?'
Neither, egg yolks are yellow.
What can run but can’t walk?
A drop of water.
I am the only organ that named myself. What am I?
The brain!

How can you throw a ball as hard as you can, to only have it come back to you, even if it doesn’t bounce off anything?
Throw the ball straight up in the air.
A mirror for the famous, but informative to all.
I'll show you the world, but it may be a bit small.
What I am?
A television.
If there are 3 apples and you take away 2, how many do you have?
If you take 2 apples, than you have of course 2.
What 3 positive numbers give the same result when multiplied and added together?
The numbers are 1, 2, and 3.
The teacher says: I have 2 apples in one hand, 1 in the other and 1 on my lap but it does not keep the doctor away and can't safely be eaten. What kid of apples do I have?
Apple products (like iPhone, Mac, iPads and son on)
The more you take, the more you leave behind. What are they?
Footprints.
What number do you get when you multiply all of the numbers on a telephone's number pad?
0. (Everything you multiply with 0 gives 0).
What never asks questions but is often answered?
A doorbell.
The dirtier I am, the whiter I get.
A chalkboard.
A boy fell off a 30 meter ladder but did not get hurt. Why not?
He fell off the bottom step.
Why can't the Tyrannosaurus rex clap?
They are extinct.
Using only addition, how do you add eight 8’s and get the number 1000?
888 + 88 + 8 + 8 + 8 = 1000.
You use me from your head to your toes, the more I work the thinner I grow.
A bar of soap.
What invention lets you look right through a wall?
A window.
There are several books on a bookshelf. If one book is the 4th from the left and 6th from the right, how many books are on the shelf?
The answer is 9.
What belongs to you but other people use it more than you?
Your name.
Poke your fingers in my eyes and I will open wide my jaws. Linen cloth, quills, or paper, my greedy lust devours them all.
What am I?
Scissors.
What is at the end of a rainbow?
The letter W.
During what month do people sleep the least?
February, it’s the shortest month after all.
I’m tall when I’m young and I’m short when I’m old. What am I?
A candle.
I take what you receive and surrender it all by waving my flag. What am I?
A mailbox.

Why we have riddles for teens?

Teenagers are close to the adult world, some are more developed than others but they’ll get there all along. These riddles will get them to think in a completely different way than what they are accustomed to, it is of course if they want to solve these riddles. The best part of all is that the riddles can be enjoyed with friends and especially the family.