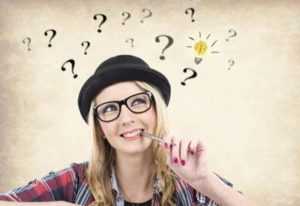 Get ready for an amazing collection of riddles with answers. Personally, I have always been fond of riddles, I have compiled this list especially for you who loves riddles just like me. All these riddles have available solutions, to see the solutions just press the riddle you want the solution for, and it will show up. Good luck.


What tastes better than it smells?
A tongue.
What runs around the whole yard without moving?
A fence.
Why are televisions attracted to people?
Because, people turn them on.
I'm so fast you can't see me, Though everyone sees straight through me, I don't stop until the day you die. What am I?
A blink of an eye.
What has no beginning, end, or middle?
A doughnut.
You throw away the outside and cook the inside. Then you eat the outside and throw away the inside.
What is it?
Corn.
What 3 positive numbers give the same result when multiplied and added together?
The answer is 1, 2, and 3.
I make you weak at the worst of all times. I keep you safe, I keep you fine. I make your hands sweat, and your heart grow cold, I visit the weak, but seldom the bold. What am I?
Your fears.
Why are Tooth Fairies so smart?
They gather a lot of wisdom teeth.
A doctor and a bus driver are both in love with the same woman, an attractive girl named Sarah. The bus driver had to go on a long bustrip that would last a week. Before he left, he gave Sarah seven apples. Why?
An apple a day keeps the doctor away!
What time does a tennis player get up?
Ten-ish.
My head bobs lazily in the sun. You think I'm cute, For my face is yellow, My hair is white, and my body is green. What am I?
A daisy.
Why heat is consider faster than cold?
You can catch a cold but not the heat.
How do bees get to school in the morning?
On the school buzz.
I'm simple for a few people, But hard for them to hear, I live inside of secrets and bring people's worst fears. What am I?
The truth.
A man bumps into his mathematician friend on the street that he hasn't seen in 5 years. The man asks the mathematician how old his children are. The mathematician, who always replies in riddles said, 'I now have three children. The sum of their ages is equal to the number of windows on the building in front of you and the product of their ages equals 36.' The friend then says 'I need one more piece of information.' The mathematician then replies 'My youngest child has blue eyes.' What are the ages of the mathematicians three children?
They are 6, 6, and 1.
I am used to bat with, yet I never get hit. I am near a ball, yet it is never thrown.
What I am?
Eyelashes.
If it took twelve men eighteen hours to build a wall, how long would it take nine men to build it?
No time at all, as it is already built.
What English word has three consecutive double letters?
Bookkeeper.
What gets whiter the dirtier it gets?
What is it?
A chalkboard.
If you had five apples and two bananas in one hand and two apples and four bananas in the other hand.
What would you have?
Very large hands.
After you go through a fall, I will take over. All life will stall, or at least grow slower. What am I?
Winter.
There is a certain crime, that if it is attempted, is punishable, but if it is committed, is not punishable. What is the crime?
Suicide.
I went into the woods and got it. I sat down to seek it. I brought it home with me because I couldn't find it.
A splinter.
What do you throw out to use and take in when you're done?
An anchor.
What has a head, a tail, is brown, and has no legs?
A Penny.
How can you drop a raw egg from a height onto a concrete floor without cracking it?
Concrete floors are very hard to crack.
What is put on a table and cut, but never eaten?
What is it?
A deck of cards.

Ready for more Riddles and answers?

What has six legs, two heads, four ears, two hands, but walks on four feet?
A horse and rider.
What falls but never breaks, and breaks but never falls?
Day and Night.
Why did the vampire take art class?
He wanted to learn how to draw blood.
How can you make the following equation true by drawing only one straight line: 5+5+5=550 Can you figure it out?
Draw a line on the first plus sign that turns it into a 4! The equation then becomes true: 545+5=550. You could also change the equal symbol to a crossed out equal symbol which means (not equal to).
What does a shark eat with peanut butter?
Jellyfish!
What goes in the water black and comes out red?
The answer is a lobster.
When you're given one, you'll have either two or none?
A choice.
A man wanted to enter an exclusive club but did not know the password that was required. He waited by the door and listened. A club member knocked on the door and the doorman said, 'twelve'. The member replied, 'six' and was let in. A second member came to the door and the doorman said, 'six.' The member replied, 'three' and was let in. The man thought he had heard enough and walked up to the door. The doorman said ,'ten' and the man replied, 'five'. But he was not let in. What should have he said?
Three. The doorman lets in those who answer with the number of letters in the word the doorman says.
Why did the clock get arrested?
Because it struck twelve.
How many animals of each kind did Moses bring on the ark?
None, Noah built the ark, not Moses.
I have four legs but never walk I may be covered in flowers but have no soil I hold food three times a day but never eat a meal.
A table.
Why was the photographer arrested?
He shot his customers and blew them up.
Name the ugliest tree.
Yew.
What loses its head in the morning and gets it back at night?
A pillow.
What is the easiest way to double your money?
Put it in front of the mirror of course!
What's the first thing a dolphin learns at school?
Her A-B-Seas.
Everyone has it and no one can lose it, what is it?
Their shadow.
The more you add, the less it weighs.
Holes.
What's a lifeguard's favorite game?
Pool.
What has to be broken before you can use it?
An egg.
What can one not keep, two hold, and three destroy?
A secret.
Why did the golfer change his socks?
He had a hole-in-one.

The last of the Riddles and answers

Your mother’s brother’s only brother-in-law is asleep on your couch. Who is asleep on your couch?
Your father.
You answer me, although I never ask you questions.
A telephone.
Some months have 30 days, some months have 31 days; how many have 28?
They all do.
What table you can eat?
You can eat a vegetable.
What has hands but never washes them?
A clock.
A box with no hinges, latch, or lid. Inside a golden treasure is hid.
What am I?
An egg.
Who gets paid when they drive away their customers?
A taxi driver.
What belongs to you, but other people use it more then you?
Your name.
I can run but not walk. Whereever I go, thought follows me close behind?
A nose.

Riddles with answers is all you need.

You reached the end of riddles with answers. I hope you enjoyed them as many others. This category of riddles and answers is not the only one containing solutions. All riddles on this website containing the right solutions. If you want to read or solve more riddles, just go to the main page of riddles and choose the category you want, you can also search for specific categories of riddles in the search box on the right.