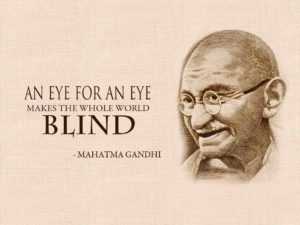 Mahatma Gandhi commonly known as “Mahatma” (meaning ‘Great Soul’) was the youngest child of his father’s fourth wife and was born in Porbandar, Gujarat, in northwest India, on 2nd October 1869, into a Hindu Modh family. He is an Indian lawyer, politician, social activist, and writer who became the leader of the nationalist movement against the British rule of India. His father was the Chief Minister of Porbandar and his mother’s religious devotion. As such, he came to be considered the father of his country. Gandhi is internationally esteemed for his doctrine of nonviolent protest (satyagraha) to achieve political and social progress.

Mahatma Gandhi Quotes is a compilation of life and teachings that have inspired many liberationists. It is a quote compilation that showed the true value of simple living and high thinking that made India an independent country without using any nuclear weapon, army, or malice – influence to anyone who wants to build a better world.

One of the few Documentary Videos of Mahatma Gandhi

This documentary video shows how India was dogged by nationalism and religious conflict on its path to independence – and how these factors mark the country to this day.

Mahatma Gandhi Quotes To Bring The Best Out Of You

Once in a thousand years, a few great people walk the face of the earth and leave their mark forever. They make such an impact on humanity which is almost immeasurable by human standards. Mahatma Gandhi was one of them. He made India an independent country without using any nuclear weapons, army, or malice.

You have reached the end of the road and  I hope you, your friends, or family have enjoyed the life-changing quotes of Mahatma Gandhi that bring the best of us.