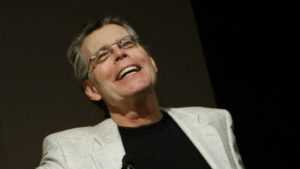 Stephen Edwin King (famously known as Stephen King) is an American author known for his  writings in the genres of horror, supernatural, suspense, crime, science-fiction, and fantasy novels. A world widely  renowned author whose books have sold more than 350 million copies and many have been adapted into TV shows, films, series and comic books.

Through these achievements, Stephen King was awarded graciously, to name a few are Bram Stoker Awards, World Fantasy Awards, and British Fantasy Award. He was named ‘’The King of Horror’’ to eternally commemorate his works and as reference to his standing in pop culture.

As a form of praise and understand his life philosophy, here are some of famous  Stephen King quotes:

One of the few recorded interviews with Stephen King

You have reached the end of the road and  I hope you, your friends, or family have enjoyed the life-changing Stephen King Quotes  that bring the best of us and I leave you with this quote of him:

“If you want to be a writer, you must do two things above all others: read a lot and write a lot. There’s no way around these two things that I’m aware of, no shortcut.”